Controlling pests and diseases in soya beans will now be much easier with the approval of two new Extension of Authorisation for Minor Use (EAMU) registrations; Lambdastar for controlling bean seed fly and Azoxystar for the control of Sclerotinia.

This is really exciting news as currently we do not have any approved products for the control of bean seed, or Delia fly or Sclerotinia in soya beans, says David McNaughton, managing director of Soya UK.

“Soya is a crop that is steadily increasing in its appeal to UK growers, just since 2016 the area grown has gone up from just over 300 hectares to 3200 hectares being sown in spring 2018 – and this is because soya has consistently demonstrated that is a profitable spring break crop, with prices currently sitting around £375/tonne.”

“Soya can be drilled anytime from the 25th April to the 25th May so it’s a viable alternative for ground that was destined for pulses but may not gone in as a result of the poor spring, or where black-grass control is the key driver for spring cropping.”

He points out that as soya beans have been considered a minor crop there has been a limited amount of approved chemistry available for use to date, but with the approval of the EAMU’s for Lambdastar and Azoxystar, soya is actually better placed than pulses for pest and disease control options.

Tristan Gibbs independent agronomist with Crop Management Partners, and a member of the AICC based in Kent and E Sussex, recognises the importance of the two EAMU approvals for the UK soya crop.

“Bean Seed fly is a significant issue for soya beans, and since the revocation of Dursban in 2016 there has not been any approved alternative. In any given year as much as a third of the crop can be lost to the pest. However, it’s often not that obvious what has caused the damage – if you don’t find the fly larvae in seedlings it may just appear as a thin crop that has not germinated well.”

Female bean seed flies are attracted to soils where there is active microbial degradation of organic matter, the highest risk is following organic amendments including incorporation of cover crops as well as recently cultivated soils.

Tristan believes therefore that the best approach is to treat the crop as close to emergence as possible, just as the seedlings are breaking ground, as this repels the flies, with 75ml/ha of Lambdastar (lambda-cyhalothrin).

“For ease, many growers tend to mix the pre-emergence with the lambda-cyhalothrin, well before the crop emerges but the treatment only persists for 5-7 days, so if the crop does not emerge in that period, the flies will lay their eggs and the larvae will cause crop damage.”

“If you are late by just two days with the application, then the flies will have already laid their eggs.”

As far as diseases in soya beans go we get off lightly in the UK, however Sclerotinia can be an issue, he says.

Growers who believe their Sclerotinia risk to be high or like to take a preventative approach can use 0.75L/ha Azoxystar( azoxystrobin), applied alone or with a post-emergence herbicide, around mid-June.

Produced by off-patent company Life Scientific, Lambdastar and Azoxystrobin are available through national distributors Hutchinsons and ProCam. UK country manager, Bill Lankford points out that for Lambdastar the maximum individual dose rate is 75ml/ha with a maximum total dose of 150ml/ha and a latest application of immediately post-emergence (BBCH 10-15).

“In addition to observing aquatic buffer zone restrictions (subject to LERAPs) there is a buffer zone of 5m to uncropped land to reduce the potential impact on non-target arthropods.”

For Azoxystar the maximum individual dose rate is 1 l/ha with a maximum total dose of 2 l/ha and a latest application of Seventh leaf unfolded (BBCH 17), he adds.

“As with all pesticide use it’s important that to read the label and comply with any resistance guidance or restrictions stated on the product label.”

Lambdastar contains 100g lambda-cyhalothrin and the extension of authorisation relates to the use on soya bean for the control of Delia platura. EAMU 20180785

Azoxystar contains 250g azoxystrobin and the extension of authorisation relates to the use on soya bean for the control of Sclerotinia. EAMU 20180786 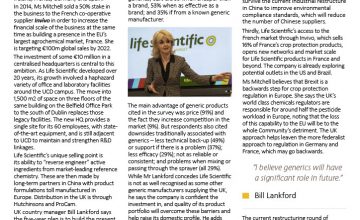